THE FUTURE IS STILL TOLERANCE

The impulse to accept, empathise with and embrace others – to recognise their shared humanity – is a part of our nature. That’s why we live in a rainbow-fuelled utopia of shiny, happy people, right? If only! So why is tolerance of others – their different backgrounds, lifestyles, choices and identities – still the future?

While empathy and embrace of others is part of our nature, the impulse to be suspicious of difference and to build walls that protect ‘us’ from ‘them’, is just as human. And in 2016 that impulse helped fuel a backlash in a number of markets against the liberal dream of an open and connected world. Right now, the proponents of a closed and, yes, intolerant world are emboldened.

But despite that, the future is still tolerance. Why? Because in the end, prejudice is born of limitation. Namely, limited (or no) authentic experience of those who are the target. Now, for millions around the world that limitation is being lifted. Making true prejudice less and less possible.

Yes, this is happening very unevenly across place and time. Yes, there have been setbacks, and there will be more. And yes, when people feel unfairly left out of the benefits created by a more open world, then greater experience of others can actively inflame prejudice – look at the toxic relationship between migration and racism in the US and Europe.

But still the direction of travel is undeniable.

One powerful driving force? The emergence of a global brain that connects diverse people and ideas. We won’t go over the stats on global connectivity again ;) Even setting aside the internet, the accelerating interconnectedness of our world is astonishing.

According to the UNWTO, between 1950 and 2016 the number of international journeys worldwide increased from 22 million to 1.2 billion. That’s over five thousand percent, in less than a single lifetime!

But we also need to talk about another epic force at work here: global urbanization.

Cities are engines of tolerance, throwing people of wildly different backgrounds and lifestyles together into a whirlwind of affluence, choice and new experiences in a way that encourages more liberal attitudes.


One glimpse of the diversity that cities foster? In 2017, 13 world cities have populations that are 25% or more foreign born.

And now consider the immense projected expansion of the world’s urban population across the next few decades. According to the latest UN figures, in 1950 just 30% of the world’s population was urban. In 2015 that was 54%. In 2050, it will be 66%. That means an additional 2.5 billion city dwellers by 2050.

A final key driver of rising tolerance? Rising participation in higher education. According to UNESCO, in 1995 around 15% of people worldwide participated in tertiary (ie post-compulsory) education. In 2015, that figure was 34%.

That’s important, because we know that participation in higher education tends to foster liberal attitudes. See a glimpse of this in the US: 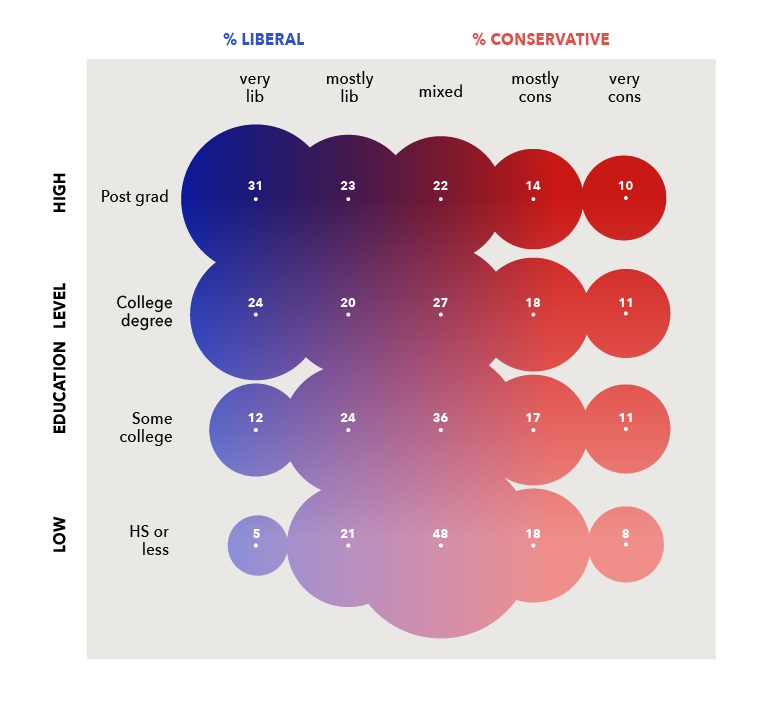 Now, no one is saying college is guaranteed to make a person tolerant! Yes, a CNN poll found that 54% of college-educated white men voted for Trump. But set that against 72% of non-college educated white men.

Connectivity, urbanization, and education: a powerful triad bending the future towards tolerance.

One warning to end on. Innovating around this truth is not for the faint-hearted. We live in fractious times. There’s a lot of anger out there. First, take a look at how these brands are living and breathing the truth that is tolerance. Then, let’s talk caveats and tactics.

We promised caveats and tactics.

First, building your next product, service or campaign around tolerance and celebration of difference will earn you criticism – even hate – as well as love. If you don’t want to weather the storm, don’t drive into it. Our take? Short-term, you may lose some customers. Long-term, this truth is a solid foundation on which to build a brand. Do it because it’s right – and know you have the future on your side.

Second, in 2016, millions in the US, Europe and elsewhere moved against a more open, connected, and yes, tolerant world. What’s more, for them decades of rising exposure to difference and diversity did not cause them to embrace tolerance. Indeed, in some cases it seemed to actively exacerbate prejudice.

The takeaway? A more open and connected world will only reliably increase tolerant attitudes when people feel that the benefits are being shared fairly. The last three decades of globalization left millions behind, materially and culturally. Anger grew. ‘The other’ became a target for that anger.

The long-term movement is still towards openness, connectedness and tolerance. But those who believe in those values need to ensure that everyone is included.

Brands must play a role in that. You can’t advance tolerance with intolerance. Taking easy shots – like this UK makeup brand that says it won’t sell products to Trump supporters – won’t help.

So yes, right now there are millions (the majority?) around the world who don’t prioritise tolerance. We’re NOT saying you should ignore them! Quite the opposite: it’s only by listening to their legitimate concerns – while still always challenging toxic views – that we’ll build a sustainably tolerant world.

The Future is still Transparency

The Future is still Aspiration

The drive to get ahead. To do better – than the rest, than yourself. To become a better person, and make sure everyone sees it. That impulse is as old as hu…

The Future is still Positive Impact

Sure, there are millions around the world who simply want more, faster, cheaper, bigger, tastier, shinier. But the truth is that long-term direction of travel…

The Future is still Empowerment

We’re in the middle of an epic power shift away from institutions – think government, social organizations, big business and more – and towards the indi…