October 2011 | Savvy consumers have never had more opportunities to make the most of their past and future possessions. Food for thought as you gear up for the busy times ahead. 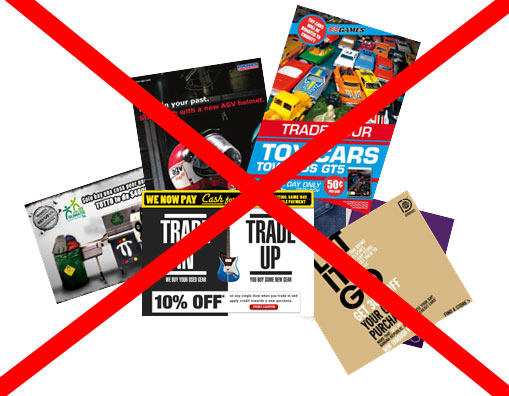 Looking at the myriad ways in which the consumer arena has moved beyond the ‘old’ model of consumption (brands produce, consumers buy), has been a regular feature in past Trend Briefings from GENERATION C(ASH) and C(ONTENT), to SELLSUMERS and OWNER-LESS.

Now, here’s yet another twist on consumers making the most of their assets and possessions:

RECOMMERCE | It’s never been easier for consumers to unlock the value in past purchases*. Novel brand buy-backs, exchange schemes, online platforms and mobile marketplaces offer smart and convenient options for consumers keen to ‘trade in to trade up’, alleviate financial strains (double dips, anyone?), and/or quell environmental and ethical concerns.

Indeed, RECOMMERCE is now increasingly affecting even consumers’ initial purchase decisions. Just as they do when buying a car or a home, consumers are factoring an item's resale value into the cost of ownership for an ever-wider range of purchases.

Check out three drivers behind the RECOMMERCE phenomenon:

* Consumers have always resold large, durable goods like cars and houses. But now almost anything is ripe for resale, from electronics to clothes, and even experiences. More on that below. Today’s EXPECTATION ECONOMY has created a consumer class that expect the ‘best of the best’ in every purchase, and these same demanding consumers are also increasingly driven by the here-and-now and a lust to collect as many experiences as possible.

All of which explains the lure of new products, goods and services: improved features, higher quality or updated design promise a novel or enhanced experience, and therefore ultimately a better or more interesting life. We've long said the search for social status is at the heart of all consumer trends. But the diversification of the STATUSPHERE means that many consumers derive status from more than just ownership of the biggest, fastest or shiniest objects, with ‘new’ status being defined by: acquired skills, generosity, connectedness or eco-credentials.

In fact, growing numbers of consumers get their status fix from being shrewd and savvy, rather than through conspicuous consumption.

Please note however, that this isn’t about complete unconsumption (which will remain alien to the vast majority of consumers), but about a more considered consumerism; where it’s smart to get cash or discounts for old or (un)used items, or to dispose of things responsibly*.

* There are of course a whole host of innovative recycling schemes, but more on them in our upcoming Trend Briefing on ECO-CYCOLOGY! The continued economic instability in the ‘West’, means more and more consumers make do with less and less. Despite this, consumers remain hungry for new experiences, which makes selling, trading, or exchanging old/unused items a perfect excuse for a smart, new, guilt-free purchase. And with (most) consumers in mature economies having had a lifetime of hyperconsumption, there is no shortage of under-used previous purchases.

Then there are also savvy RECOMMERCE-aware consumers (whether hit by the recession or not), who are actively upgrading their consumption: encouraged to purchase or even 'invest' in higher quality or premium brands now, knowing that they can be easily and lucratively (re)sold anyway.

TRADE IN TO TRADE UP

Consumers are more aware than ever that their old products have value, yet loss aversion, the endowment effect (overvaluing one’s own possessions), and the inconvenience of selling mean that consumers are frequently reluctant to sell even seldom-used items.

Which is why brand-led TRADE IN TO TRADE UP initiatives overcome many of these barriers: consumers can quickly and conveniently unlock the value in their old products, while instantly laying their hands on new, improved versions.

Shoppers in fast-moving sectors such as fashion and consumer electronics welcome trade-in programs, as they help offset the prohibitive expense of staying up-to-date with always-desirable new products with ever-shorter life spans, and often ensure that outdated items get reused or recycled.

Just a couple of signs of the times: Gazelle, a US-based electronics trade-in site, bought 2,000 iPads in the hour after Steve Jobs announced the iPad 2. While in July 2011 an Experian survey found that 35% of people were planning to buy an iPhone 5, despite having not even seen it!

Indeed, almost all electronics brands offer trade-in schemes, and this is increasingly spreading to bricks and mortar retailers too: Fashion consumers and brands are also embracing TRADE IN TO TRADE UP programs: And of course, TRADE IN TO TRADE UP is perfectly suited to any industries with high-value, long-lasting products: There are, of course, a number of specialist RECOMMERCE bricks and mortar retail concepts, many of which have been around for years:

Indeed, almost anything be traded in: And of course, we couldn’t let this Trend Briefing pass without looking at least two recent innovations in auto RECOMMERCE: Of course eBay, Amazon and Craigslist have dominated traditional RECOMMERCE for years, yet online P2P marketplaces continue to innovate and attract new audiences: RECOMMERCE opportunities aren't restricted to physical goods: services are game too. Case in point: the daily deal phenomenon. As over 20% of offers are never redeemed (Source: Rice University, June 2011), smart start-ups are already enabling consumers to resell their coupons. While online platforms will forever have a place in the RECOMMERCE landscape, convenience-loving consumers will embrace the speed, spontaneity and instant gratification of mobile marketplaces. Buying and selling via mobile fits in with consumers’ active lifestyles. Whilst hyperlocal marketplaces remove the hassle of postage, as buyers and sellers can easily meet up. Is RECOMMERCE a ‘new’ mega trend that’s going to transform your business completely? No. But on-the-ball readers will already be brimming with ideas about how they can apply the insights in this Trend Briefing to their businesses tomorrow (and certainly in the run up to the holiday season). By helping people realize the value in past purchases in such a way that is not only gratefully appreciated (there's a big feel-good factor to RECOMMERCE that fits well with the call for more 'human' brands), but also generates sales and profits. Which, we imagine, should be music to all business people’s ears right now.

And RECOMMERCE also offers opportunities for brands that want to escape the race to the bottom, where promoting items' long-term value will help consumers stomach paying higher prices. Something that luxury brands have long understood, witness the Patek Philippe advert above, which dates from 1949(!).

Oh, and true entrepreneurs will of course already be setting up their very own RECOMMERCE service (everything from authentication to valuation to platform services), further expanding the already fast growing RECOMMERCE eco-system.

Next? Our next free Trend Briefing will hit your inbox on 31 October, so make sure you’re subscribed. Until then, good luck and enjoy!