Why guilt-free is the new luxury for consumers, and the Holy Grail for businesses.

We've been scanning the globe for consumer trends, insights and innovations since 2002. We report on our findings in our free Monthly Trend Briefings and Region-specific Trend Bulletins, while leading brands and agencies, small and big, also enjoy access to Premium, our full trend service.
We rely on teams and representatives in London, São Paulo, Singapore, New York, Sydney and Lagos, and run a network of 2,600+ spotters in 100+ countries. More »

If you are working on a story about trends for 2015, then please feel free to publish part or all of our trends. Our only requirement is that you credit trendwatching.com.
Or do email Victoria Loomes, who will connect you to the best person in our team for an exclusive comment/ quote; we'll try to make your deadline-dominated life easier!

In addition to our monthly briefings, we also offer our 2015 Premium Service: a full, 'have to have' trend service, which includes access to our 2015 Trend Report, Trend Framework, Innovations Database, Industry Updates, and an Apply Toolkit.

Hundreds of (big &small) brands and agencies around the world already have access. Can you afford to miss out? »

Our other free publications

Email to a friend 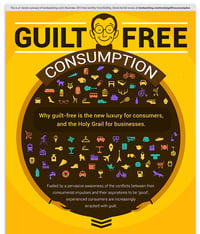 This month’s Trend Briefing highlights nothing less than the future of consumerism, if not that of business at large (yes, the future of humanity will follow next month ;).

Building on our recent Trend Briefings on CLEAN SLATE BRANDS and DEMANDING BRANDS, and bringing together various strands of the HUMAN BRANDS and BETTER BUSINESS mega-trends, GUILT-FREE CONSUMPTION (GFC) is a compelling answer to the current, epic quest for more aware, more ethical, more sustainable consumerism.

Fueled by a pervasive awareness of the conflicts between their consumerist impulses and their aspirations to be 'good', experienced consumers are increasingly wracked with guilt. The result? A growing hunger for a new kind of consumption: one free from worry (or at least with less worry) about its negative impact, yet that allows continued indulgence.

Note: This Trend Briefing was inspired by a recent comment from Gerald Lawless, CEO of Jumeirah Hotels, on how the future of luxury would be ‘guilt-free’.

One of the Big Human Needs is to consider oneself ‘good’. And human beings feel good about themselves when they live according to their most deeply-held values and aspirations.

Yet mature consumers are ever more aware that the desires and impulses they experience – and worse, that they constantly act upon and satisfy inside the consumer arena – often run counter to these values and aspirations.

Every day, consumers are served more information on dysfunctional business processes and ethics, hear the strained voices of workers from developing countries, or receive scientific insights on the health drawbacks of many a favorite (and processed) snack or beverage.

It has thus become completely impossible for any individual in near- and fully mature consumer societies to claim ignorance over the havoc his or her consumption is and has been wreaking.

While on top of this, the flaunting of ethical and responsible behavior by a whole host of CLEAN SLATE BRANDS only highlights the deeply flawed nature of many established products and brands. Take condoms, for example. How many consumers considered the ethical dimensions of condoms before Sustain Condoms highlighted the environmental and social abuses often found in the production of latex?

With every brand that shouts about not employing 9 year old child workers in Bangladesh, about not force-feeding poultry, whose products do not depend on tarry oil-fueled engines, consumer doubt towards those that keep quiet grows.

However, a very human mix of status, indulgence, conditioning, addiction and genuine pleasure (derived from everything from tasty Whoppers, to romantic easyJet/AirAsia/JetBlue city breaks, to dirt-cheap-yet-coolish H&M outfits, to shiny phablets), stops consumers from substantially changing their knowingly damaging consumption needs and patterns.

It’s this tension – between the values that consumers hold, and the pervasive awareness that the actions they take run counter to those values – that manifests itself as the potent, nagging guilt trip that haunts many consumers today.

When presented with the statement ‘I feel guilty about the impact I have on the environment’, 28% of global consumers* scored themselves 4 or 5 (out of 5, with 5 being ‘strongly agree’).

* Somewhat ironically, some emerging economies had a higher guilt level: 45% of Indians, 42% Chinese and 40% of Brazilians rated themselves 4 or 5. Contrast this with only 23% of British, 21% of Americans and 19% of Australians.

The good news: beset by these contradictory needs – to seek pleasure in the satisfaction of impulses, and to shake off a rising feeling of guilt – consumers are now hungry for a new kind of consumption, one that will allow them to continue to enjoy consumption, yet not worry (or at least worry less) about its negative impact.

Indeed, a recent global study identified 2.5 billion of these 'aspirational consumers' (representing one third of the global consumer class). These consumers are defined by their love of shopping ( 78% ), desire for responsible consumption ( 92% ) and their trust in brands to act in the best interest of society ( 58% ).

Now, GUILT-FREE doesn’t have to mean either zero-impact, ethically perfect, health-optimum consumption, or even no consumption at all**.

Most consumers do not hold values that mean that even the slightest negative impact on the planet, on society or on themselves is unacceptable to them. They just want to know that this impact is as little as practically possible.

Indeed, for now at least, the most potent GFC innovations will target those areas where there is greatest tension between consumer values and impulses, and help absolve the most tormenting guilt.

* When it comes to guilt, these aren’t the only dimensions of course. Just as an example, witness how some newly-minted urban consumers often experience ‘cultural’ guilt: split between their desire to dive into the global consumer arena and the thought that they are ‘abandoning’ their identity and heritage (to assuage that guilt, turn to our CELEBRATION NATION trend ;)

** Only truly reducing one’s consumption, i.e. consuming less, offers the ultimate redemption. But that’s something 99% of consumers seem not ready for yet. And neither are most brands.

As a brand, identify the consumption choices that cause most guilt when it comes to physical and mental wellbeing: sugar, fat, alcohol, inactivity, and more. Then take steps to absolve that guilt.

September 2013 saw fast food giants McDonald's and Burger King sparring with GFC initiatives. Burger King launched Satisfries - French fries with 40% less fat and 30% fewer calories than the McDonald's equivalent. While McDonald’s announced a global partnership with the Alliance for a Healthier Generation to make specific commitments, including always offering a choice of a side-salad, fruit or vegetables as a substitute for fries in a value meal.

Or learn from a more light-hearted example: the Peddler’s Creamery ice-cream shop in Los Angeles opened its doors in April 2013, and powers its churner by asking customers to peddle an in-store bicycle. GUILT-FREE indulgence indeed!

As a brand, identify the consumption choices that cause most guilt when it comes to other people: poor working conditions, sub-poverty wages, exploitation, and more. Go ahead: absolve the guilt!

Check out Fairphone, the smartphone from the Netherlands now in production after easily breaking its pre-order target of 5,000 sales in June 2013. It's manufactured without using conflict minerals and with a focus on worker welfare.

Or how about online retailer Shop For Social, launched in Singapore in July 2013. The site partners with and curates products exclusively from local social enterprises and nonprofits, and includes handicrafts made by disabled or disadvantaged individuals.

Fossil fuels and CO2 emissions, wasteful packaging, non-biodegradable materials, rainforest destruction: there is no shortage of potent guilt when it comes to the planet.

A few recent examples to learn from:

Eating sushi is notoriously environmentally suspect. Miya’s Sushi in Connecticut, US, goes beyond simply not including endangered fish such as yellow tail tuna on its menu: it offers dishes made with non-native, invasive species that are damaging the local habitat, and thus eating (and enjoying) them makes customers part of the solution. How’s that for GUILT-FREE?!

An energy efficiency hackathon in Singapore was recently won by the Wish Lit app. It allows the user to enter the cost of a desired object and then calculates how much energy they need to save in order to purchase it.

So be more than just eco-conscious, and embrace everything from cradle-to-cradle, the circular economy, collaborative consumption (Airbnb is a great example of experience indulgence 'allowed' because it's using existing assets) and more in your quest to become totally eco-neutral if not eco-positive.

The sweet spot for any GUILT-FREE brand is, of course, to deliver in all three categories simultaneously.

The opportunity to absolve consumers is an enormous one. Sure, virtually every brand now claims to be a green brand, a responsible brand, a human brand, a sustainable brand, an honest brand, or a transparent brand. But striving towards offering GFC might encourage more purpose and direction – internally too – than lofty social or environmental goals, especially since GFC is focused on what counts most in business: actual end users’ (deep) needs.

With that in mind, we look forward to your innovations, and are expecting them to come with a proud (recycled) ‘GFC’ sticker to boot.

Want to get going with GUILT-FREE CONSUMPTION? Then why not use our free CONSUMER TREND CANVAS tool to structure a brainstorming session? You may feel guilty if you don't ;)

Our next free Trend Briefing – our big, year-end '7 Big Consumer Trends for 2014' – will hit your inbox on 5 December 2013, so make sure you’re subscribed. Until then, good luck!