THE FUTURE IS STILL TOLERANCE

Remnants of tribalism, apartheid, carelessly-drawn borders post-colonial hangovers still loom over the continent and remain among the most pressing issues for Africa to confront. Making tolerance – and indeed, a truth that in the context of Africa, mainly speaks to unifying broken communities, consumers and citizens-at-large – a hugely powerful one for innovators to address.

Yes, there are headwinds pushing against the political progress of recent years:

– The resurgence of anti-African xenophobic attacks in South Africa.

– Rwandan citizens have collectively voted for Paul Kagame to continue ruling for a (newly-established) third term.

– The growing presence of terrorism continues to pose a threat to the fragile movement of unifying nations. The UN’s conflict prevention specialist Mohamed Yahya claims in the past five years 33,000 people have died in terrorism-related violence in Africa.

Yes, the continent has been long plagued with division and wars stemming from such divisions, yet key influencers, brands and players in industries such as sports, media and entertainment have been pushing the agenda for a more unified Africa, which has also resonated powerfully in the minds of many consumers.

Younger Africans care less about tribes, and the issues of their parents’ generations. Rather, they are using the internet as a vehicle to form ‘new tribes’, based on ideals, interests and lifestyle, and establishing what – we’ve called in the past – New African Narratives.

Meanwhile, recent years have also seen the emergence of policies and regulations that have helped to drive trade across regions and new intra-continental industries. Talks of a single passport for all of Africa, and visa-free travel for Africans continue to gain momentum as institutions such as the African Union believe the closer Africans are with each other, the better.

Externally too, the continent continues to build ties with a global African diaspora. The slow yet inevitable departure from solely Western influence, teamed with newly formed alliances with the likes of ‘Black-Americans’, the diaspora, North Africans (who traditionally distanced themselves from sub-Saharan nations) and even the East highlights a paradigm shift in what it means to be ‘African’. Just take the diaspora in the US: of major immigrant groups arriving in America, Africans grew the fastest — 41% — between 2000 and 2013 (Pew, February 2017). 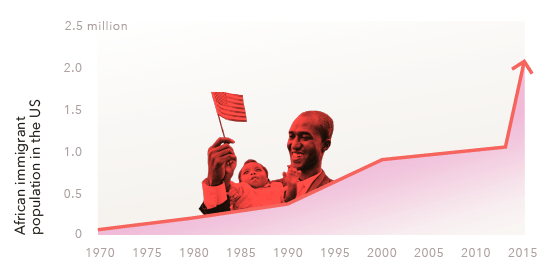 Pan-Africanism is back but has been upgraded to fit the needs of the more globalized, interconnected African.

The takeaway for innovators? Serving the cause of African unity is not only a truth but a prerequisite for survival!

Of course, brands that encourage inclusion, tolerance and unity between traditionally antagonistic tribes will always find favor with those who’ve felt the long-term negative effects of such divisions. Plus, when done tastefully, celebrating diversity can also be a winner amongst all Africans too. Consider how you can take a BRAND STAND and ‘set an example’ by showcasing minority groups and other kinds of societal/tribal underdogs. We guarantee that – even more than you realize – many increasingly tolerant African consumers will respect you for it!

And why not take your tolerance strategy one step further? In 2017 there will also be ample opportunities to champion unity between other types of equally non-cohesive ‘tribes’, like the young vs old, the rural vs city-dweller or the rich vs poor. Yes, tackling African segregation can be a daunting endeavor but the biggest prize will go to the boldest of brands, who foster tolerance and meaningful value creation among and between all social groups.

Post-truth, Asia-style. Why aspiration and empowerment will be two truths that successful Asian brands will focus on.

Transparency and empowerment: two big, human truths for Latin innovators to run with in the post-truth era.

Empowerment and tolerance: two truths for African brands to run with.